Today, I woke up and felt happy. This is a strange feeling as I spent most of my San Valentine’s days alone ruminating why everyone was off celebrating and I was home on my own. I guess all the meditation and several boxes of antidepressants are really helping in keeping my emotions under control. Considering the unusual and strange feeling I decided to dress up and come to lab this morning because you really don’t need a partner to celebrate love.

But chemically speaking what love? Let’s analyse all forms of sexual desire.

Lust is a psychological force producing intense wanting or longing for an object. Lust can take any form such as the lust for sexuality, love, money or power. It can take such mundane forms as the lust for food as distinct from the need for food. Lust, which comes from the ancient Greek, means desire, but nowadays is often associated with a sexual desire. This is because of a verse written in the New Testament and the word lust was used to refer to a woman after she committed adultery (Matthew 5:27-28). Chemically speaking Lust is governed by both oestrogens and testosterone, in both men and women.

Attraction is driven by adrenaline, dopamine, and serotonin—the same chemicals that are released by exciting, novel experiences. Dopamine is also released during the sex and it’s the chemical that produces the sensation of pleasure. Dopamine is also released in response to eating your favourite food, gambling, receiving a compliment, or listening to your favourite song. It becomes a sensory experience you seek out. The more reward (in this case, sex), the more dopamine and the more you continue to hunt for it. If it makes you feel good, you want more. I suppose this is an evolutionary reward to keep up the survival of the human race.

Long-term attachment is governed by a very different set of hormones and brain chemicals, oxytocin and vasopressin, which encourage bonding. Interestingly, oxytocin is known as the cuddle hormone and is the hormone that drives the bond between mother and child.

What does society make of love? Unfortunately, I have the feeling that there is a lot of pressure on women to settle down with a man and start their own family. It shouldn’t really be this way because finding a partner does not mean relying on someone to fulfil our lack of condidence, self-esteem appreciation (what else?).

One should be able to stand up and walk on their own before walking hand to hand with someone else. 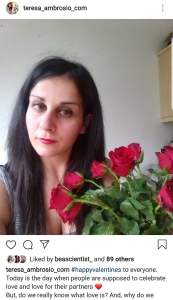 I recently came across a news about hiring a boyfriend for a few hours just to take a picture for your Instagram page. This is really sad but, somehow, I am not surprised because I know exctatly how it feels like to be single for a long time and people constantly asking you “When you think you are gonna get married?”, “Did you find a boyfriend yet?” Sometimes people don’t say anything but looking at their faces or hearing comments about other single women tells a lot about their outdated mentalities. If you don’ know how it feels like, just watch The Bridget Jones diary and, specifically, the moment when she’s the only single woman at the table with all couples.

Love yourself first before loving someone else!

I personally believe that one should love themselves first, be happy on their own and know what they want from life before sharing their life with someone else. And don’t forget that love comes in different forms, you can love your family, your friend, a stranger and be fulfilled, although any of this is labelled as romantic love.

Happy Galantine’s day to you all! Much love, Also thanks to my family for this beautiful message this morning. Sorry only in Italian!

About the Author: Dr Teresa is a scientist holding a PhD in organic chemistry, founder and creator of women transforming science